All About Bangor Maine

Welcome to the Bangor Region! You will find yourself surrounded by friends as you enjoy the area and what the communities have to offer.

The Bangor Region was recently ranked first among small cities in the special millennium edition of Places Rated Almanac, and it will not take you long to find out why. You will find the Bangor Region provides something for everyone.

The Bangor Region is centrally located in the State of Maine, making it the perfect headquarters for day trips. Commonly referred to as a “Gateway” because of its central location, Bangor is a great hub for those inclined to set off on a new adventure and explore all of the opportunities Maine has to offer. In fact, there’s no excuse for boredom! With Maine’s temperate climate and beautiful four seasons of fun, there’s no way to do everything in only a few days.

Heading north you can experience the wonders of Baxter State Park, the northern end of the Appalachian Trail. If you prefer fresh water, you can explore the natural wonders of Moosehead Lake, one of Maine’s largest lakes. Heading towards the coast, you can spend a day exploring this country’s second most visited national park, Acadia. From rugged seaside cliffs, sheltered beaches, to mountain vistas, Acadia truly deserves its popularity. The Camden-Rockport region also provides visitors with an opportunity to explore many quaint towns along Maine’s coast, with lots of hidden fun.

But why leave Bangor? There are lots of fun things to do right here. 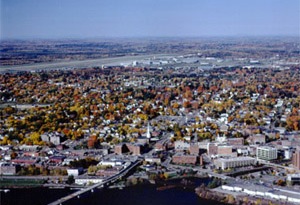 The history of the Bangor Region is as long and winding as the Penobscot River itself. Early European explorers sailed along the Maine coast in search of Norumbega, the fabled stone city where natives dressed in fur trimmed with gold. The first expedition up the Penobscot dates back to 1525, when a Portuguese sailor named Estavao Gomes sailed all the way up the river to what is now Bangor. In 1604, Samuel de Champlain also searched up and down the river for that fabled city, with the help of a Penobscot Indian guide.

This region was first settled in 1769—as Kadesquit Plantation—by Jacob Buswell, his wife, and nine children. They became the first Europeans to settle at the mouth of the Kenduskeag Stream. During several years, Europeans would alter the name of the plantation from Kadesquit to Condeskeag to Kenduskeag. The river itself played a huge role in shaping the fortunes of the Bangor Region. Large sailing vessels, the mainstay of transportation during this period, were built and traveled along towns up and down the Penobscot Bay, including upriver to Bangor. Of course it was timber, Maine’s primary resource, that drove the economy.

As America continued its expansion into the nineteenth century, the demand for fuel and shelter grew at an unprecedented rate; and Maine’s white pine was prized above all other wood for those needs. The timber trade, along with Bangor’s harbor, made this region the “lumber capital of the world.” Lumberjacks harvested the northern Maine woods and sent their logs down the Penobscot River where they were picked up by runners in Bangor. Even though the timber boom eventually diminished in the Bangor Region, it not only put this part of Maine “on the map,” but also shaped our community and our people.

All the resources that were in place to help support the lumber industry continued to thrive. They maintained this region in prosperity through the years. The Bangor Region has continued to grow into an educational, retail and cultural center for northern and central Maine.

How Bangor Got Its Name

In 1791 settlers decided to incorporate themselves as a town. Because Maine was part of Massachusetts at the time, the settlers had to petition the Massachusetts General Court to become incorporated. The Rev. Seth Noble convinced his neighbors they should call their town Sunbury. Noble’s neighbors gave him the task of going to Boston to deliver the town’s petition.

While waiting to present the petition in Boston, Noble began whistling his favorite tune: “Bangor.” When a court official asked Noble what his town wanted to be called, Noble was caught off guard. Daydreaming, perhaps, Noble thought he’d been asked the name of the tune he’d been whistling. So instead of saying “Sunbury,” he said “Bangor.”

So Bangor it was. On February 25, 1791, the General Court approved Bangor for incorporation.