Maine is recognized as one of the most healthful states in the nation—summer temperatures average 70 degrees F and winter temps average 20 degrees F.
Maine abounds in natural assets—542,629 acres of state and national parks, including the 92-mile Allagash Wilderness Waterway, Acadia National Park (the second most visited national park in the United States), and Baxter State Park (location of Mt. Katahdin and the northern end of the Appalachian Trail—the 5,267-foot Baxter Peak on Katahdin is the first spot in the United States to see the sunrise!). Maine boasts 6,000 lakes and ponds, 32,000 miles of rivers and streams, 17 million acres of forestland, 3,478 beautiful miles of coastline, and 2,000 islands.

Maine is the vacation home to former president and first lady George and Barbara Bush (Kennebunkport).

Maine zinc and copper deposits are some of the biggest in the country.

Maine consists of 16 counties with 22 cities, 424 towns, 51 plantations, and 416 unorganized townships. Maine has one county (Aroostook) so big (6,453 square miles) that it actually covers an area greater than the combined size of Connecticut and Rhode Island. Maine is about 320 miles long and 210 miles wide, with a total of 33,215 square miles—about as big as the other five New England states combined.
Maine until 1958, Maine held its presidential elections two months before the rest of the country. People said “As Maine goes, so goes the nation.” They looked at the results from Maine to predict who would be president. 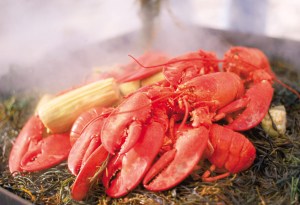 Maine is the home to such great writers as Stephen King and E.B. White.

Maine earmuffs were invented in Maine by Chester Greenwood in 1873.

Maine has more moose per square mile than any other state.

Oh, Pine Tree State
Your woods, fields and hills
Your lakes, streams and rock bound coast
Will ever fill our hearts with thrills
And tho’ we seek far and wide
Our search will be in vain
To find a fairer spot on earth
Than Maine! Maine! Maine!