No animal is more symbolic of Maine’s northern forests than the moose, as officially attested by its adoption as Maine’s state animal and its appearance on the state seal. With its thick-set body, short neck and inordinately long legs and head, the moose is spectacular, but surely not the most beautiful animal in the forest. But when you see it roam the boggy places, the tangled undergrowth, or the deep snow, you realize how wonderfully adapted the moose is to its environment.

The moose is the largest antlered animal in North America, and the largest member of the deer family in the world. A large male, or bull, may be as long as 10 feet, 7 feet tall at the shoulder, and weigh three-quarters of a ton. No lightweight herself, a large cow may weigh nearly a half ton. Only the bulls have antlers, and they are usually palmated, up to 6 feet across the widest spread, and can weigh hundreds of pounds.

In North America moose are found from coast to coast, from the Arctic tundra south into the northern United States. They are distributed statewide in Maine but are most abundant in northern, western and eastern counties, where the climate, habitat conditions, and relatively low deer populations are favorable for moose.

Observing moose in their natural habitat has become a popular activity for many people, and is locally important to the tourism economy. It’s an enjoyable leisure pastime, and one requiring no special equipment. Even serious moose watchers use only a pair of binoculars, and maybe a camera and a canoe.

The best period for moose watching is late spring to mid-summer, when the animals are likely to be seen in shallow ponds or in and around roads. A common belief is that moose seek the water at this time for relief from the heat and flies, but new research suggests that the real reason is their need for sodium, depleted from their bodies after the long winter. Biologists say aquatic plants fulfill that sodium “hunger” much better than other moose foods. Their sodium craving also attracts moose to roadsides, where they find salt accumulated from winter spreading on the roads.

The period from late August to mid-September is another good time to see moose at the ponds-particularly cows with their calves. At other times, moose are wherever you find them, and this includes everywhere from the deep woods to downtown areas, where an occasional stray moose may wander.

A few words of caution

* Moose are not considered dangerous, but they should not be startled or approached too closely on land or in the water. Cow moose are often very protective of young calves; and during the mating season, in late September and early October, the bulls can be aggressive.

* Be constantly alert when driving in moose country. Hundreds of moose, and several people, are killed each year in moose/vehicle accidents. 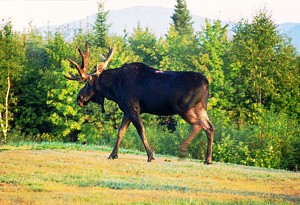 * One of the easiest ways to see a moose is to simply ride on Rt. 15 between Greenville and Rockwood at sunset during the summer months. The back road from Greenville to Shirley is also a good road for moose watching. There are several boggy areas along the roadside which are frequented by moose.

* Moose breeding, the rut, is in late September and early October. Bulls over the age of 4 are dominant breeders. Cows may have their first offspring at 1 1/2 to 2 1/2 years of age. The first birth of a cow is usually a single calf and twins are common in older cows. Moose calves, born in May or June, weigh about 30 pounds and stay with their mother through the first winter.

* Most Maine moose are younger than 14 years and a real old moose might reach 20.

* In late spring and early summer, moose often look “scruffy” because they are shedding their winter coats and sometimes rubbing places itchy from ticks.

* Concerns about a declining moose population in Maine during the early 1900’s led to increased restrictions on hunting until, in 1935, legal moose hunting ended. As the number of moose increased over the next 45 years, so did interest in restoration of moose hunting and in 1980, the legislature authorized a conservative and limited open season on moose. Even though hunting has resumed, the moose population has continued to increase and there are more moose now than in 1980.

The best places to see moose in Maine are:

* Jackman area: Route 201 from Bingham to the Quebec border.
* Moosehead Lake Region: All around the lake.
* Millinocket area and Baxter State Park
* Aroostook County: Along Route 11